Reversing the pain: a new dawn for Bolivia

What happened in Bolivia during the last elections has been a fascinating social and political process worth sharing with you, wherever you are.

The Movement for Socialism (MAS) and the international left triumphantly interpret their victory as the electoral ratification of their project. This reading constitutes an almost neurotic act of self-delusion, equal to that of the opposition: defeated fascist groups that insist on decrying electoral foul play. Today, the fascist groups that once posed a real threat a year ago have become merely ridiculous.

I sigh deeply and still feel between my ribs a body that is not only tired but also sore: muscle by muscle, cavity by cavity, vein by vein, it is the body of Bolivian society.

In front of the ballot box stood a multitude, not individuals[i]

Elections have become sets of experiments that turn us voters into lab rats. Our behaviour is calculated based on fear, hate, media manipulation, fake news and large etcetera that is part of a device called “electoral marketing.”

At the same time, voting options aren’t the pronounced political “forms of representation” of collective wills, government programs and projects, but options within a controlled environment in which your vote does not count in itself.

In that context, nothing can go wrong: every vote seems to be a vote against popular struggles. One appears to be facing a prearranged board game that cannot be reversed. In Bolivia we did reverse it, and I want to tell you how, because I want to believe that the same method can work in other latitudes and even in the United States against Trump.

The vote that was destined to be empty of content acquired a meaning: the meaning of collective veto. That is why I affirm that MAS has not won, though circumstantially it appears to have done so. Its triumph is a mirage because the content of the vote is not adhesion to its project, but the veto.

For you to understand me, I will transfer this reasoning to other latitudes: in the United States, it is not the Democrats’ victory that is being fought for, but solely Trump’s defeat. In this defeat, the Democrats become a circumstantial mechanism.

The multitude recognized itself as different and distinct from the oligarchy. The ballot created a complex “us”, almost geographically separated from “them”, who were established as foreign, as despicable, as bosses.

The vote was a veto on racism.

The vote was a veto on corruption.

The vote was a veto on the burning of the Wiphala[ii].

The vote was a veto on extortion and police abuse.

The people who died of the coronavirus voted because we said “no” on their behalf.

Those killed by the Añez government in the cities of Senkata and Sacaba voted because we said “no” on their behalf.

Voting was a way of throwing the government out of the Palace and showing a total and widespread repudiation.

It’s not that MAS is the great project of the indigenous peoples; it is in fact the party that restricted direct indigenous political representation, and violated the political constitution of the Plurinational State of Bolivia hundreds of times. Yet, faced by fascism on a laboratory board, we chose a way out that is palliative, transitory, and practically possible.

You will say that I am projecting my personal feelings onto the masses; to that, I reply that this is not the case. If this considerable mass of votes, more than 50% across the country, had supported the MAS project, Evo Morales and Álvaro García Linera would not have been forced to run away, would not have been deposed of like flies on the wall as they were in October and November 2019.

The vote was also deployed as a punishment vote against everyone who participated in the formation of the Añez government. That is why Mesa, Camacho and Quiroga lost and received what in Bolivia is called a “beating.” Furthermore, two candidates had to withdraw from the elections before reaching the polling station because civil society had already signalled the coming punishment: the veto, this collective repudiation. They fled to erase the evidence and avoid public humiliation.

It’s not that I am idealizing Bolivian society: I suffer from and live it every day. It’s not that collective intelligence is something tangible that operates continuously. Human beings have lost it just as we have missed other forms of perception and sensitivity, like instinct and intuition. But as much as these different forms of awareness and behaviour have been lost, they reappear at specific times. I say that they reappear in moments of pain, in moments of extreme pressure. The night before the elections, our most populous cities were militarized once again, and the streets once more looked like theatres of war with troops in combat gear deployed, mostly in the peripheral areas. This fascist gesture activated our collective intelligence.

Reversing the pain and turning it into something else

Suppose there is one thing I see every day. In this case, it is the capacity to transform things into their reverse, something that we women are doing as a daily act of insubordination against patriarchy, as an act of disobedience to submission and as an act of hopeful and irreverent contestation of the denial of our freedom. The ability to reverse the fascist pressure from the right and turn it into its opposite has been a giant collective act in the Bolivian elections. Repression and fascism were miscalculated, just as was fear. We were pushed to the extreme, socially understood as the end of something; a place where the darkness becomes light and pain becomes rebellion.

In Bolivia, we were able to reverse the senses in the face of the electoral ballots. It opened up a space of dreams, a space of construction and struggles because what has happened is a re-appropriation of our destinies, precisely at the moment when it seemed that everything had been taken away from us.

In this game, MAS is just a circumstance.

María Galindo is a Bolivian anarcho-feminist activist, a psychologist, a radio presenter and a former TV host. She founded the Mujeres Creando (Women Creating) feminist movement in Bolivia that unites women of different sexual identities, classes and conditions in the fight against machismo and homophobia.

This text was translated from Spanish by Katharina Richter

The photograph that illustrates this article is by Pablo Vitale

[i] ] I borrow this great concept from Toni Negri as it undoubtedly transcends class analysis in its most conventional sense.

[ii] Wiphala is the multi-coloured chess flag used throughout the continent as the flag of the indigenous peoples. This flag was incorporated in Bolivia as a national symbol and was even attached to the police uniform. During the overthrow of Evo Morales, a policeman in a balaclava burnt it in front of the Legislative Assembly and cut it from his uniform. These gestures remain inscribed as acts of hate in the social imaginary.

The Chronicles of Marijuana Stocks 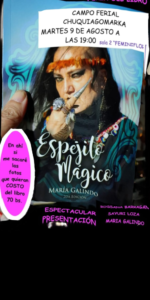